Corvallis, OR (March 17, 2014) — OptiTrack™ today announced a pair of additions to its premier line of motion capture and tracking cameras – the Prime 13 and Prime 13W, which will publicly debut in the OptiTrack booth (#924) at the Game Developers Conference (GDC) held March 19-21, 2014 at the Moscone Center in San Francisco, Calif.

Offering 40’ tracking range, 1.3 megapixel (MP) resolution, and 240 FPS capture rate, the Prime 13 is ideal for medium-sized motion tracking applications that require a blend of performance and affordability. The Prime 13W is an ultra-wide FOV variant specifically tuned for tracking almost every inch of smaller spaces, such as CAVEs, powerwalls, HMD environments, gait labs, and other compact installations. 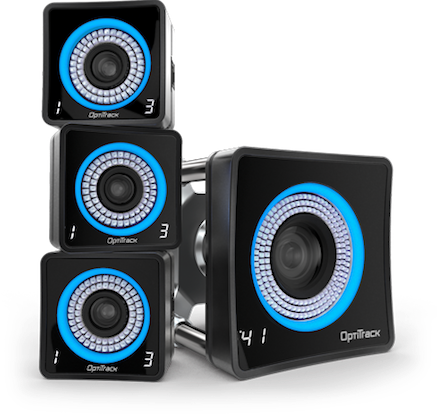 Learn more about the Prime 13

Motion capture specialists Imagination Studios – an outfit that has contributed to AAA titles such as the “Battlefield” franchise, the “Hitman” series and “Alan Wake” – is building the world’s first Prime 13 stage, which will be used for 3D animation and previs across entertainment projects.

“As existing users of the Insight VCS, our team at IMS has a high level of familiarity with and confidence in OptiTrack products,” said Andrew Hutchinson, Animation Manager at Imagination Studios. “We are delighted with the launch of the Prime 13, as this system fits precisely with our plans to further our capabilities and reach. The Prime 13 perfectly complements our existing setup, suiting a broader range of customers and budgets while still allowing us to continue providing our world-renowned quality and service.”

Key features and specs include:

“Both the Prime 13 and Prime 13W models capture the essence of the Prime Series—best in class performance with a unique and innovative nod to usability—and deliver it at half the price of competing cameras in the same category,” said Jim Richardson, CEO of OptiTrack. “Our Prime 41 has been deployed on the largest and most capable performance capture stages around the world. The Prime 13 offers studios and labs the same caliber of engineering, specifically tuned for smaller setups and budgets. VR environments and other super compact spaces have a tailored offering as well, in the highly specialized Prime 13W.”