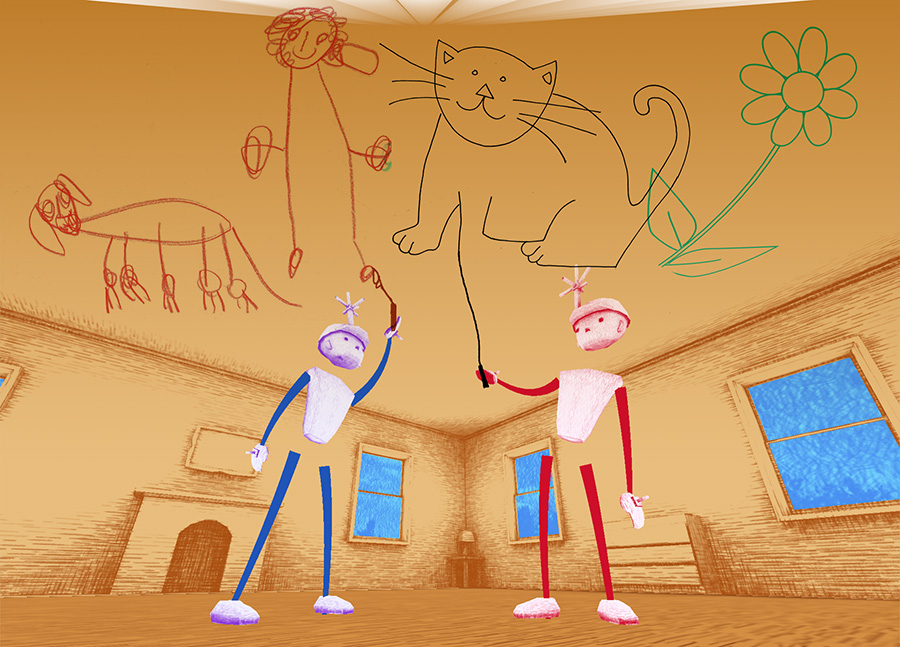 The 2015 SIGGRAPH Conference being held in Los Angeles, Calif, August 9-13 will feature a dedicated space for the world’s most advanced virtual reality (VR) and augmented reality (AR) experiences. Dubbed VR Village and located in Exhibit Hall G, the joint initiative from ACM SIGGRAPH and Emily Carr University of Art + Design includes a curated selection that offers attendees an opportunity to explore these emerging storytelling formats. Among the presentations to be spotlighted is ‘Holojam,’ a nomadic VR experience developed by Dr. Ken Perlin and his students at New York University (NYU) that’s made possible with tracking by an OptiTrack motion capture system.

For ‘Holojam,’ participants will don untethered GearVR headsets and be transported into a virtual space, where they’ll contribute to an evolving 3D sculpture using ‘wands.’ Up to five people will share the area at once, moving around freely and appearing to one another as stylized avatars. Participants will be tracked at wrists and ankles, in addition to the headset and wand, with their positioning captured by OptiTrack Prime 13 cameras in a 32’ x 34’ area and tracked using rigid body solves in OptiTrack’s Motive software. The OptiTrack system’s real time tracking data will be multicast via Wifi into the Unity game engine running on each headset. Bystanders will be able to view the evolving virtual sculpture, and even scrub through it in time, on a large monitor next to the exhibit.

“The powerful combination of OptiTrack and GearVR lets people freely walk around and create art together in an alternate world, a preview of the future of VR as a social experience,” said Dr. Perlin. “VR is progressing so quickly that it’s hard not to be excited for the future; we knew it needed to play a feature role at this year’s show,” said Denise Quesnel, Industry Liaison and Adjunct Researcher S3D Centre, Emily Carr University of Art + Design. “Low latency, wireless motion capture enables a whole body VR experience, and with OptiTrack we have the technical capability and budget flexibility to further explore untraditional applications, like ‘Holojam.’”

The interactive virtual sculpture will remain on display until the conclusion of the conference. Beyond local collaboration, Dr. Perlin and his team have been testing ‘Holojam’ remotely, linking up participants at Emily Carr in Vancouver and NYU in New York to share virtual space in real time.

In addition to ‘Holojam,’ VR Village will include sit-down and stand-up head-mounted display stations and a nomadic VR arena in which participants will be able to freely walk around in virtual environments. It is also set to feature a theater running fulldome and VR cinema reels, live talks and special live performances at ‘Appy Hour.’

For more information on OptiTrack mocap technology, stop by booth #515 at SIGGRAPH or check out: www.optitrack.com.