Laying the foundation for 7,678 minutes of animation

One of metricminds’ largest undertakings to date involves the creation of 7,678 minutes of animated soccer footage for Betradar, a company that creates statistics-based products offered in betting bureaus and casinos around the world. The footage serves as a library of scenes for illustrating brief one-minute summaries of soccer games in Betradar’s virtual league, their premier virtual gaming platform.

Tracking a soccer team (and the ball) from afar

To provide the ultimate in realism for up to 12 soccer players/performers at a time, a massive capture area was required for the shoot. metricminds secured a spacious local warehouse that allowed the team to set up a circular capture volume with a 25-meter diameter and 5-meter height. Artificial turf, the goals, netting and metricminds’ 64 OptiTrack Prime 41 cameras were then installed. 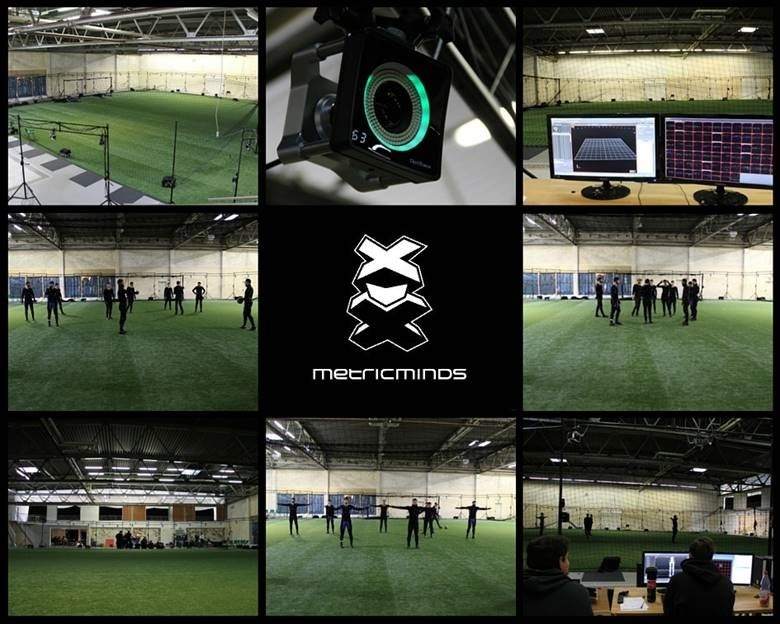 “One of the cool things about our OptiTrack system is that the cameras see really far, so we were able to capture the necessary data from the perimeter, rather than having to build truss on the top of the field, which would have required more money and effort,” shared Phillip Weiss, managing director, metricminds.

Once the two-month Betradar shoot wrapped, metricminds relocated the OptiTrack system to its studio, where it’s regularly deployed for video game cut-scenes or in-game animation. The team has also incorporated mocap into their previs pipeline for rapid prototyping. By simultaneously recording real-time data streams in OptiTrack’s Motive software and Autodesk MotionBuilder character animation software, they’re able to create a previs blueprint in MotionBuilder for general scene approval and to determine camera placement. After previs is greenlit, the team can easily clean up and solve the data, shaving off significant production time.

“OptiTrack hardware is so well put together,” Weiss said. “The fact that you can use regular network cables to hook up and power the cameras is amazing, and the ability to see the camera view on your workstation with the click of a button so that you can aim it properly makes setup easy and intuitive.”