"Knowing the demands of the shoot, we even tested the OptiTrack system in bright sunlight, and it worked nicely outdoors. Plus, the cost was significantly less than other options."

‘Amazing in Motion’ is a set of projects by Lexus that explore the complexity of motion. The second installation of the brand series, ‘Swarm,’ is a spirited story featuring custom-designed small aircraft known as quadrotors that roam through various locations in Vancouver, Canada at night. Executed by CHI & Partners in collaboration with Director Sam Brown of Rogue Films and KMel Robotics, the 60-second spot utilized OptiTrack™ motion capture technology, including 35 Prime 41 cameras and Motive software, to track the flying robots. 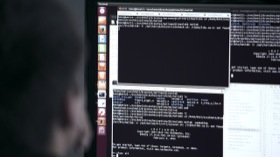 CHI & Partners approached KMel in July 2013 to create what would become ‘Swarm.’ KMel co-founders Daniel Mellinger and Alex Kushleyev, along with their team of engineers, worked heavily with the director and agency creative team to shape the direction of the piece and establish interesting quadrotor movements that could be executed in the real world. As the parameters were being finalized, KMel solidified the motion capture pipeline that would be used to track the vehicles. 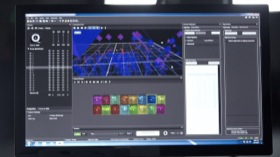 “We were able to demo the OptiTrack Prime 41 system and saw a lot of potential,” Mellinger said. “The tracking range and accuracy of the cameras were great, and the IR light didn’t distract like what you encounter with visible red illumination, which was really important during filming. Also, the compact design of the cameras felt solid, and the Ethernet cables were really useful for rigging multiple setups simultaneously. Knowing the demands of the shoot, we even tested the OptiTrack system in bright sunlight, and it worked nicely outdoors. Plus, the cost was significantly less than other options.” 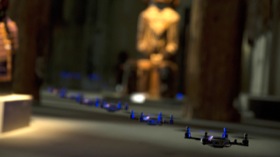 KMel, taking design cues from Lexus vehicles, crafted every aspect of the quadrotors – including shape, size, hardware, software and on-board electronics. The OptiTrack motion capture system was used as a simulated GPS for controlling the quadrotors in various formations. The system tracked the quads in full infrared (IR), streaming 6DoF position and orientation data to a control computer that commanded the quadrotors to follow precise trajectories determined by heavy math and algorithms – resulting in the execution of complex maneuvers with apparent ease. 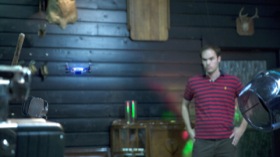 “Motive software is very intuitive and was excellent in determining the location of the rigid bodies in 3D space. From there, we custom scripted commands to the quadrotors and used OptiTrack’s NatNet SDK to stream the data from Motive to our control computer,” Mellinger explained. “Creating that pathway was super easy. We just sent the data over Ethernet and then read it off on other machines into our software.” 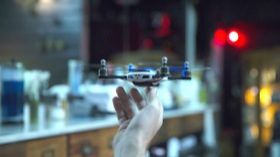 The September filming took place over the course of five nights in indoor and outdoor locations across Vancouver, including a swimming pool, supermarket and the Museum of Anthropology. Given the tight timeline, the OptiTrack setup was split into two groupings that enabled the production to leapfrog from one shot to the next. An ambitious eighteen different motion capture setups in volumes ranging from 2m x 1m x 1m to 12m x 4m x 3m were deployed throughout the shoot. To further complicate onsite logistics, there were physical limitations as to where the cameras could be mounted in each setup and still provide enough coverage so that the quadrotors could be accurately controlled without appearing in the shot. 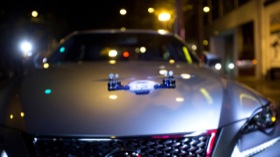 “We were using the Prime 41s in real-world settings around obstacles that blocked the camera views, so we had to make sure we had enough cameras to see the quadrotors – even with occlusions,” noted Mellinger. “Another hurdle was managing a workspace that was generally illuminated with film lights and sometimes had reflective surfaces, both of which sometimes interfere with motion tracking. We did a lot of testing and were able to appropriately tune the Prime 41 camera settings so that any adverse environmental impacts were mitigated.” 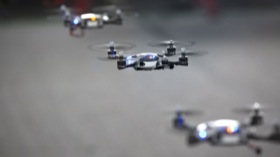 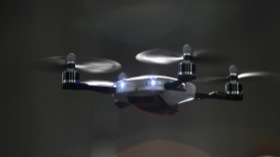 Mellinger concluded, “OptiTrack was amazing. We pushed the limits as to how the Prime 41 cameras are normally used, and their support team was with us every step of the way. It was exciting for us to take motion capture technology and the quadrotors that we’ve been working on for so long out of the lab environment and into the real world. Our ambitions paid off, and we were able to get a lot of interesting shots that we didn’t even think were possible when we started.”

OptiTrack™ is the largest motion capture provider in the world, offering high-performance optical tracking at the most affordable prices in the industry. The OptiTrack product line includes motion capture software and high-speed tracking cameras, as well as contract engineering services. Used by facilities worldwide in a variety of markets ranging from film and games to sports training and biomechanics, OptiTrack customers include Luma Pictures, Microsoft Game Studios, Proof, Halon Entertainment, The Moving Picture Company, Audiomotion Studios, Rockstar, nvizage, Electronic Arts, Animatrik and other top studios and developers around the world.

OptiTrack About Who's Using OptiTrack?KMel Robotics